Meeting with the first heroine of the Vietnam People's Army

Cunning, brave, resilient and indomitable, the former platoon leader turned 83 when we first met her. However, she still had a good memory of an unforgettable time with bombs and fires. Although she could only walk within her small house everyday, her heart and mind always turn to the Party and to the Vietnamese people. 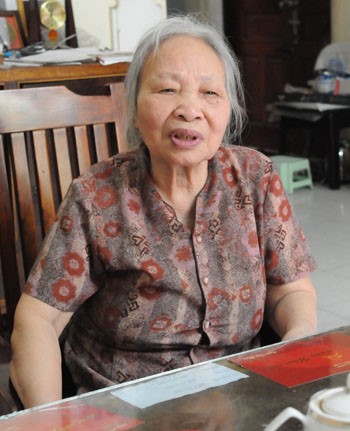 The first heroine of the Vietnam People's Army - Nguyen ThiChien

Along with famous names of the heroes of the people's armed forces during the anti-French resistance period such as Cu Chinh Lan, La Van Cau, Nguyen Quoc Tri, Mac Thi Buoi, Be Van Dan, Phan Dinh Giot ... the first heroine of the Vietnam People's Army - Leader of Nguyen Tan Thuat Female Platoon (Kien Xuong district) was not only a prominent name in the gold table of combat achievements of Thai Binh army and people, but also a typical example of the noble qualities and traditions of the Vietnamese army and people in the struggle for peace and for freedom and independence of the nation. Clever, brave, resilient and indomitable, the former platoon leader is now 83 years old, but her memory of the time with bombs and fires is still very clear so that even though she could only walk within her little house, her heart and mind are always towards the Party and Vietnamese people.

Without warning, we as children and grandchildren in the land where she was born quietly left Thai Binh to visit her. Without much difficulty as some journalists have described, we found her house which is located peacefully in a small alley of Ngoc Thuy Ward, Long Bien District, Hanoi. Seemingly accustomed to having frequent visitors, hearing the call, her husband quickly took the key to open the gate. A small yard, a grapefruit tree, though not yet in full bloom, was enough to cool the hearts of passersby by the broad green foliage spreading down the yard. The familiar feeling from the simple and rustic simplicity of the decoration, the furniture and appliances in the revolutionary elderly couple helped us quickly approach them.

Hearing the words "Thai Binh", she took turns to look at each of us, then suddenly closed her eyes. In that quiet space, we could feel the pain of missing homeland deep in her heart for she hasn’t been back to Thai Binh for long time.
Hearing that we wanted to write about her - the first heroine of the Vietnam People's Army, her husband did not refuse, but hurriedly stood up, opened the drawer of the closet to get a double stack of paper, and then handed us a piece of paper: “My wife is weak these days, sometimes she remembers, sometimes she forgets. You just need to read the article Uncle Ho wrote about her, published in the People's Newspaper No. 60 issued on June 5, 1952 with the pseudonym CB, that’s enough”. Waiting for us to finish reading the article written by Uncle Ho nearly 62 years ago, he went back to the past, and could not hide his pride that has remained intact since the day he knew and touched by his first love. As an officer in charge of the emulation in the Army, in February 1952, he was assigned to participate in the review, screening and selection of typical examples to prepare for the National Emulation Congress. He said that on that day, localities and branches all over the country introduced and nominated a lot, everyone was good and deserved, so to evaluate, choose the brightest, most worthy examples is a challenge for officials working in emulation.

In the list of people selected by the Central Military Commission's Standing Committee to submit to the Politburo consider then reported to Uncle Ho to commend and reward there was a name of his later mate. Although he had never met her at that time, did not know what she was like, but reading the general report of Thai Binh province's militia in the early 1952 period - including the significant contributions of the leader of Nguyen Tan Thuat commune guerrilla  Platoon (KienXuong, Thai Binh) he was very impressed and admired her. His joy doubled when the choice and proposal of the Standing Committee of the Central Military Commission was approved by Uncle Ho. In May 1952, at the national Congress of Emulation, together with La Van Cau, Cu Chinh Lan, Nguyen Quoc Tri, Nguyen Thi Chien - female guerrilla of Thai Binh became first national Heroes of the Army and she was also the first heroine of the Vietnam People's Army.

While he was passionate about telling stories about emulation, she sat quietly listening, as if swallowing every word. Perhaps the excitement of her partner made it easy for her to recall her memories - a slow moving film about a time full of hardships but also very heroic of the heroine of the province famous for producing rice (Thai Binh).
Joining the commune militia since 1946, she deeply realized that defending the Fatherland is an obligation, a noble and sacred right of all citizens; especially when President Ho Chi Minh called for national resistance: "Any man, woman, old, young, regardless of parties, ethnics, religions, as long as being Vietnamese must stand up and fight against the French colonialists to save the country”. Following the motto "The whole population are soldiers, each village is a fortress", under the direction of the communal military team, she took part in training, and at the same time with local people promoted production, step by step built a resistance village, prepared to fight against the enemy. In February 1950, French troops opened fire on Thai Binh. By the end of April, they had established a fairly dense fortress l system in the province. With the repressive apparatus and the fortress system in hand, the enemy continued to raid force local people to surrender, in order to quickly establish a safe rear, from which they could mobile troops to support other battlefields.
Mrs. Chien's guerrilla team was 100% female, so many people who could not stand the brutal suppression of the enemy had left and tried to flee to unoccupied areas. The lives of cadres, party members and guerrillas who stayed in the land and clang to the local people were extremely hard, arduous and miserable.... As the head of the platoon, more than ever, Nguyen Thi Chien understood that the more arduous, the harder they had to try to defeat the enemy in order to regain independence, freedom and prosperous life.
Overcoming all challenges, the young woman, sought all ways to mobilize, propagate and educate her teammates as well as the people to understand Vietnam’s situation, the enemy's situation, encouraged fighting with the will of "Going deep into the enemy's heart, no running in front of the enemy's gun". Understanding the psychology of women, when overcoming the moment of weakness, they will be more courageous than ever, the platoon leader used special circumstances to introduce the aspiration of happiness, belief in winning for them. And so, the squad of female guerrilla of Nguyen Tan Thuat commune increasingly attracted the participation of the most hungry, the poorest, the most miserable women; because they were fully aware that if they wanted to be happy, to avoid suffering, to take revenge on the enemy who brutally slaughtered their husbands and children, wanted to save their people, protect their country, the only one way was self-reliance, standing up to fight the enemy.

In the middle of the talk, Mrs. Chien suddenly smiled and said: “During the years of resistance, my guerrilla squads were sometimes crowded sometimes with only a few. The enemy swept and killed so that many women were afraid to participate, but by being help to strengthen their faith, they enthusiastically joined and vowed not to get married to fight the enemy until the liberation”.

When we asked if she was ever afraid then, she shook her head: “If I had been afraid I would not have joined the platoon. Witnessing the enemy destroying our village, killing people, the more the hatred the more you would want to fight. It was the deep hatred that helped me to come up with many initiatives in battle, especially stealing enemy weapons to fight them and to be persistent, resilient and courageous". Therefore, during those arduous years, in a very difficult situation, besides some people feeling afraid, there were many brave people including female party member, Platoon Leader Nguyen Thi Chien, helping to strengthen the faith and determination of resistance of the local people.
Building a revolutionary movement at the grassroots level, directing the guerrilla team in coordination with the main forces involving in many battles, the petite girl with two cute pigtails was once a terror to enemy. Once guiding the way for the officials to a meeting, meeting the enemy on the way, the platoon leader tried to distract the enemy to her side, allowing the Party cadres to escape, and she was arrested. More than 3 months of torture by all means, many times threatening to be shot but she did not reveal anything, so the enemy had to release her.

She confided that when she was called by her superior to attend the First National Congress of Emulation, she was very surprised because the achievement was not made by her alone but she had the honor. Meeting Uncle Ho directly, she was very happy. To her, all her dreams were fulfilled; because she only wished to live to be able to meet the beloved Father of the country.
With experience in organizing and deploying local guerrilla forces, she was transferred to Hanoi capital, responsible for directing militia forces in 4 suburban districts. After many years of working, she retired with the rank of Lieutenant Colonel, carrying many wounds which hurt her when the climate changes. Loving Mrs Chien, her partner took her everywhere for medical treatment; some people offered her 100 doses of medicine without a penny. He said: The press kept saying my wife and I were miserable and Ms. Nguyen Thi Doan – Vice National President, who once visited our home, asked us if we had any difficulty; I said that every month we received good salary and lived very well. During the war, our entire people were miserable; after the revolution there has been no more difficulty. The neighbors around me love my wife and me very much. Moreover, there was a saying "Love people, people will respect and follow you".

Hearing him speak, she looked at us and smiled kindly: “It is not our time any more, I am unable to do anything”. Suddenly, I looked down at the surface of the table, and saw the solutions suggested to overcome the depression of political virtues and lifestyles of civil servants. That’s what she asked her granddaughter to write when she was most alert. Seeing that I was interested, she said: “I give it to you, just take it home”!

I was dumbfounded, wanting to hug her but I did not dare. I don't know how many journalists have bothered them by saying the words that are not true, but for us, though it is just one meeting, the impression that the old couple gave was us very special. I went home with her instructions: “The younger you are, the more you have to learn, to do. Being a journalist, you have to travel more, learn more, go into every corner of life to attain deep understanding ”... The wind from the dyke of the Red River was blowing to cool the city. Late spring sun was shining gently in the alley. Suddenly, I saw her, under the blossom grapefruit, spreading her white hair, smiling so gently and peacefully.